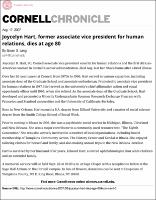 "Joycelyn R. Hart, 80, Cornell associate vice president emerita for human relations and the first African-American woman in Cornell's senior administration, died Aug. 6 at her Ithaca home after a brief illness."Over her 26-year career at Cornell, from 1970s to 1996, Hart served in various capacities, including associate dean of the Graduate School and associate ombudsman. Promoted to associate vice president for human relations in 1987, Hart served as the university's chief affirmative action and equal opportunity officer until 1996, when she retired. As the associate dean of the Graduate School, Hart developed and promoted a Minority Undergraduate Summer Research Exchange Program with Princeton and Stanford universities and the University of California-Berkeley.” Cornell Chronicle, October 13, 2007

This is an audio recording of the memorial service held on September 22, 2007 at Sage Chapel. Running time: 64 minutes.