The Political Economy Of Development Finance 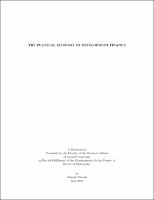 My dissertation consists of three essays that collectively seek to understand the political economy of development finance. The first essay of my dissertation investigates the relationship between coups and aid allocation. It argues that the end of the Cold War was a historical juncture that reshaped the international donor community's aid-based sanctioning policy towards coups d'´tat while the U.S. has not consistently complied with the growe ing international norm of political conditionality due to geopolitical or commercial interests trumping its rhetorical commitment to penalizing coups. Since aid flows are likely endogenous to political instability in a given country, I use exogenous variation in the success (or failure) of coup attempts to estimate a causal impact of coup-led regime change on aid disbursements. I find strong evidence that the international donor community as a whole has become increasingly harsher in penalizing coups over time, particularly since the early 1990s when Cold War politics subsided. In contrast, my empirical analysis finds no enough evidence that the U.S. has consistently reduced its aid disbursements in the events of coups d'´tat. e Shifting away from the cross-national level of analysis, my second and third essays focus on the domestic factors that influence the distribution of development finance within an aid-recipient country and, in turn, how this allocation impacts its state institutions. In particular, the second essay explores how electoral incentives shape the geospatial allocation of donor-funded development projects in Zambia. Challenging a widespread belief in African politics that autocrats reward their own core supporters with more resources, I argue that when they have limited knowledge about citizens' voting preferences, political elites allocate development projects to districts where opposition to the ruling party is strong. My empirical analysis of geospatial data on development projects in Zambia for the period of 1991-2010 reveals that those districts where opposition parties enjoy greater electoral support receive more donor projects, which runs directly counter to the key prediction of the core voter model. The final essay shifts the focus of analysis from the determinants of development finance allocation to its fiscal effects at the local level. The increasing amounts of development finance are now channeled through intergovernmental transfers. In Africa, fiscal transfers from the central government account for a significant proportion of local budgets. The conventional wisdom in public finance suggests that such external transfers often "crowd out" revenues collected by local government authorities (LGAs). In this paper, I argue that this line of logic does not apply in the context of Africa where sound fiscal institutions are absent at the local level. I argue instead that fiscal transfers provide essential sources of finance for LGAs to improve their fiscal capacity and deliver goods and services to their own constituencies, which in turn expand the tax base at the local level. Analyzing newly available quarterly fiscal data on local budgets in Tanzania, I find strong evidence that intergovernmental grants facilitate local revenue generation. My empirical analysis also reveals that this positive effect of fiscal transfers on local revenues is less pronounced in districts where a greater proportion of voters support the ruling party.