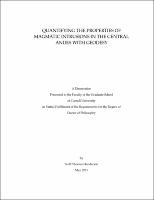 Volcanism in convergent arcs is the end result of magma ascending to the Earth's surface. However, many of the details of the ascent process are still debated. In particular, how long does magma persist in reservoirs at particular depths? What is the timescale and physical mechanism of ascent between reservoirs? To address these questions this thesis investigates volcanic deformation in the Central Andes Volcanic Zone of South America (CVZ, 15-28? S). The CVZ is one of three distinct volcanic arc segments in the Andes that results from the subduction of the Nazca Plate beneath the South America Plate. To begin, I compile available information for Holocene eruptions to show that despite containing the largest number of 'active volcanoes' (70), the CVZ has only 12% of recorded eruptions in the Andes. I then demonstrate through a synoptic survey with Interferometric Synthetic Aperture Radar (InSAR) that 40% of volcanic deformation events in the Andes over the last two decades occur in the CVZ. Next, I attempt to constrain the physical properties of two active intrusions in the CVZ that are unique in terms of their large size (>50km diameter) and persistent maximum rates of uplift (>1 cm/yr for >10yrs). First, I focus on Uturuncu Volcano, where I analyze InSAR and GPS data to constrain the spatial and temporal deformation pattern between 1992 and 2014. I propose a 'dipole' model of magma transport between vertically-aligned reservoirs in the lower crust and middle crust to explain the observation of uplift and peripheral subsidence at Uturuncu. The ratio of vertical to radial surface displacements for single inflation source is increased by adding a dipole reservoir, but decreased to a greater degree by crustal heterogeneity known from seismic tomography. Additionally, volume discrepancies of 1-10x between source and sink reservoirs are expected given known ranges of lower crustal material properties in the Central Andes. Finally, I present current InSAR and GPS observations at Lazufre Volcanic Complex through 10/2014 that show maintained spatial and temporal patterns of uplift compared to the previous two decades. Using a finite element model for an opening sill I demonstrate the role of layering and 3D heterogeneous structure based on newly-available seismic tomography. The proposed heterogeneous structure increases the surface displacements for homogeneous crust by less than 7% within a 10km radius of the center of uplift.