Three-Photon Microscopy At 1700 Nm For In Vivo Imaging 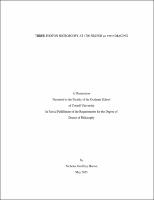 Multiphoton fluorescence microscopy (MPM) allows scientists to noninvasively observe structures deep within tissue. Two-photon microscopy (2PM) in the 750-1000 nm excitation region has been the standard MPM technique since its first demonstration in 1990. However, the maximum imaging depth for 2PM is limited by the signal-to-background ratio (SBR). In this dissertation, three-photon imaging at 1700 nm excitation wavelength (1700 nm 3PM) is presented. The combination of the long excitation wavelength and the higher order nonlinear excitation overcomes the SBR limitations of 2PM, enabling biological investigations to take place at greater depth within tissue. In chapter 1, tissue imaging is discussed, paying special attention to the development of laser scanning fluorescence microscopy. In chapter 2, non-invasive, high resolution, in vivo imaging of subcortical structures within an intact mouse brain using 1700 nm 3PM is presented. Vascular structures as well as red fluorescent protein (RFP)-labeled neurons within the mouse hippocampus are imaged. In chapter 3, dispersion compensation of 1700 nm 3PM is discussed. Signal generation in 3PM is proportional to the inverse-squared of the pulse width. We show that the high normal dispersion of a silicon wafer can be conveniently used to compensate the anomalous dispersion of a 1,700 nm excitation three-photon microscope. We achieved over a factor of two reduction in pulse width at the sample, which corresponded to over a 4x increase in the three-photon signal. This signal increase was demonstrated within the mouse brain in vivo. In chapter 4, through-skull imaging using 1700 nm 3PM is demonstrated. The strong scattering properties of the skull traditionally require either its partial or total removal in order to achieve a sufficient penetration depth. Skull modifications have been shown to alter brain properties, which can subsequently affect imaging experiments. We demonstrate in vivo vascular imaging 720 m below the skull-brain interface through an unthinned, intact mouse skull and RFP-labeled neuron imaging 350 m below the skull-brain interface. Our results show that long-wavelength 3PM has the potential to perform high spatial resolution in vivo imaging deep in the mouse brain without the removal of the skull.