Synthesis, Characterization And Evaluation Of Poly(Acrylic Acid)-Graft-Poly(Ethylene Glycol)'S As Boundary Lubricants For Treatment Of Osteoarthritis 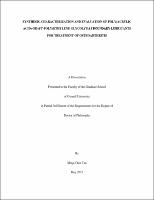 Osteoarthritis (OA) is a debilitating disease affecting the joints such as hips, knees, and shoulders. It involves degradation of the cartilage tissue and is generally irreversible given the limited self-repair mechanisms of cartilage. To aid in preservation of cartilage, the body produces lubricin - a natural boundary lubricant that binds the surface of cartilage and protects it against wear. In rat models of OA, supplementation of lubricin has been shown to prevent OA disease progression. In OA joints, production of lubricin is impaired and the mass production of lubricin has proven difficult and infeasbile. However, biomimicry can allow us to design, via synthetic routes, molecules that can have the same functionality of lubricin in the joints. Following the hypothesis that lubricin's boundary lubricating properties are tied to its structure, it is possible to apply biomimetic design criteria to create synthetic lubricin-like molecules. In this work, a combinatorial library of polymer brushes composed of poly(acrylic acid) (pAA) and poly(ethylene glycol) (PEG) are synthesized to mimic the structure and function of lubricin and to screen for how several parameters influence function. The parameters involve different molecular weights of pAA and PEG as well as grafting ratios (PEG:AA). The pAA was synthesized via RAFT polymerization and PEG was conjugated via condensation chemistry at the given grafting ratios. The resulting 27 polymers are called poly(acrylic acid)-graft-poly(ethylene glycol) (pAA-g-PEG). The stability of these polymers was tested to determine ideal storage conditions and potential degradation products in what is called a forced degradation study. Here the polymers are subjected to accelerated oxidative and hydrolytic (acidic and basic) conditions. The results demonstrate resistance to hydrolysis but prone to oxidation especially of the PEG component. To characterize the pAA-g-PEG's, a novel method involving Fourier transform infrared spectroscopy (FTIR) and either single value decomposition (SVD) or partial least squares (PLS) modeling was employed. The hypothesis is that the FTIR spectra of pAA-gPEG is a composition of pure pAA and PEG spectra. A series of known mass mixtures of pAA and PEG were spun coated on CaF2 slides and their spectra captured. They were then decomposed in Matlab either through SVD or PLS and compared to their known pAA mass fractions in a calibration graph. Decomposed pAA-g-PEG spectra were then be compared to this graph to determine pAA mass fraction and percent conjugation of PEG side chains. However, the results demonstrated effectiveness only for lower grafting ratios (0.5 and 0.25) but were ineffective for the highest grafting ratio of 2. Finally, the evaluation of pAA-g-PEG's as boundary lubricants were done in vitro on bovine cartilage explants and in vivo on rat models of OA. In both in vitro and in vivo studies, pAA(60)-2-PEG(2) (60,000 g/mol pAA; grafting ratio 2; 2,000 g/mol PEG), demonstrated the greatest reduction in coefficient of friction compared to negative controls. In vitro binding time constant (~20 minutes) was much less than synovial clearance time (~5 hours). In vivo studies also showed through histological analysis chondroprotection of cartilage in OA rats compared to controls, meaning it protected against OA disease progression.