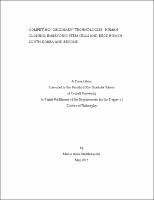 This dissertation explores the emergence and development of a South Korean Buddhist discourse supporting cloned human embryonic (hSCNT) stem cell research as a national and global project of religious cultivation which mobilized Korean Buddhists via a more participatory "Buddhist Bioethics" promoting the scientist Hwang Woo-suk (黃禹錫) and his controversial work. I begin with an analysis of the fears and fantasies surrounding the figure of the "human double" or Doppelganger and the "human clone" in the traditional American and Western European contexts where, I argue, the double/clone exhibits the characteristics of what Jacques Derrida dubs "the supplement" - that which is invented to supplement or extend the "original" human being but also inevitably returns to haunt, enslave, and sometimes even destroy its human source. Given that Buddhism employs different ontologies of human being - including the doctrine of no-self anatman 無我, for example - when compared to traditional Western-European, Christian metaphysics, I ask does the modern introduction of "man-made-human" (人造人) and "human cloning" (複製人間) discourse in Korea provoke similar anxieties, apprehensions, and phantasmagorias? When examining the work of Han Yong-un (韓龍雲), an early Korean Buddhist modernizer, and Korean newspapers from the early twentieth century to the present day, I find that a deep-seated dialectical ambivalence akin to the haunting logic of the Derridean supplement also surfaces in "doubles/clones" discourses in Korea, although there are also significant variations as well as subtle differences. A striking variation, which forecasts later Korean Buddhist understandings of Hwang's human cloning research, is found in a newspaper editorial whose author can only comprehend the dangerous duplicity of human cloning via U.S. global politics. However, this "independent" understanding serves to magnify Korea's subjugation and post-colonial status several years later, when it is repeated, again, during the "Hwang Scandal." To further illuminate (Korean) Buddhism's role in this national and international scientific event, I show how American scientists and journalists publicly presented "Buddhist human cloning beliefs" as well as how Hwang Woo-suk presented his own Buddhist beliefs to the American public and to Korean Buddhists. I present materials gathered from fieldwork with Korean Buddhists rallying to support Hwang's research; interviews with people involved in organized discussions of Buddhist bioethics, and primary source material from Buddhist newspapers to explicate how Korean Buddhists came to participate in a "Buddhist Soteriology" of stem cell science. In certain Buddhist discourses, Hwang is described as seonjisik (kalyāņamitr 善知識) who sacrificed worldly comfort for "pure" scientific pursuits. Moreover, his cultivation of "originary technology" loosely mirrored ideas about Zen (Seon 禪) practice; and Korean Buddhist women were particularly instrumental in pledging to donate eggs as dana (布施) to support Hwang's research endeavors.