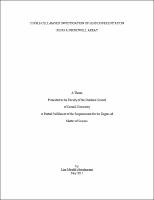 The average cell population response to a range of stimuli inaccurately reflects individual cell response due to heterogeneity in previously assumed homogeneous cell populations. It is hypothesized that this contributes to metastatic potential in tumors, with the most invasive cells being molecularly and behaviorally distinct from the bulk. In the work presented here, we designed and optimized a microwell array for use in high throughput single cell studies with the ultimate goal of studying heterogeneity in tumor populations. We investigated device shape, seeding density, and well depth, diameter, and spacing. The acute myeloid leukemia cell line HL60 was used as a model uncommitted precursor cell line and we began investigating population variance by inducing differentiation along the granulocytic lineage with all-trans retinoic acid (ATRA).