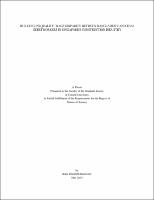 Although national origin specific wage differentials are prevalent in many guestworkforces, this topic has not received attention in academic scholarship. In this paper, I draw from in-depth interviews to account for a wage differential between first-time Thai and Bangladeshi construction industry guestworkers in Singapore. I argue that Thai workers' higher wages are an outcome of the Thai state's comparatively better regulatory provisions (including the imposition of a minimum wage for Thai guestworkers) as well as differences in the sub-national groups for whom Singaporean construction jobs meet the dual criteria of being appealing and attainable. Whereas in Thailand, Singaporean construction jobs have limited appeal beyond poorly educated peasants originating in communities with a culture of international labor migration, in Bangladesh, migrants originate in the rural middle-class. Cognizant of differences in the class specific attitudes that the different migrant groups have toward work, many Singaporean employers prefer to hire "hardened Thai rice farmers" instead of Bangladeshi "school-boys".