Modesty In A Global Age: Women’S Sartorial Practices As Markers Of India’S Modernity And Tradition 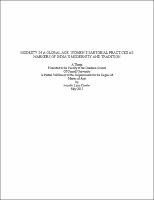 This thesis explores modesty as an index of modernity and tradition, and globalization and nationalism in North India and how modesty complicates these dichotomies. It begins by examining the changes that the definition of modesty underwent during the Indian national period under British colonial rule. The focus then shifts to the legacy of these changes and the further changes produced by the current era of neoliberal policies, religious nationalism, and the expansion of globalization into Indian cultural, economic, and political life and discourse. To explore the way the definition of what is modest has undergone transformation in these different periods and the cultural and political significances of these shifts, I consider women's sartorial practices. The second half of the thesis investigates the links between women's sartorial practices, definitions of national and Western values, practices, and identities by North Indian actors, women's symbolic representation through dress (and other behaviors and practices signified by dress) of these particular understandings of the Indian nation and the West. The thesis concludes by considering the explicit connections that women establish between modest apparel and personal security in public spaces with respect to their roles as representatives of the nation. Finally, I explore how different spaces, like the NGO space, produce different discourses for appropriate sartorial practices and modest dressing that allow for some experimentation, while also reinforcing neoliberal conceptions of appropriate sartorial practice.