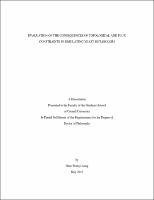 This dissertation presents an evaluation of the reconstruction of Saccharomyces cerevisiae's metabolic network in the Yeast consensus model. A particular focus in this curation was fatty acid, glycerophospholipid, and neutral glycerolipid metabolism. By comparing the information contained within the Yeast v6.0 model to that in literature, I found inaccuracies which included incorrect gene-reaction associations, improper definition of substrates/products in reactions, missing connections between metabolites, inappropriate assignments of reaction directionality, and nonfunctional [beta]-oxidation pathways. Changes to address these issues were implemented to generate Yeast v7.0. To understand the impact of the changes made throughout the evolution of the Yeast consensus model, I examined differences in the maximum pathway yield of eight industrially relevant metabolites and six lipid species that were calculated by the iMM904 model, a progenitor to the consensus models, and the three latest major version releases of the consensus model at that time: Yeast v5.01, v6.06, and v7.11. The factors that led to differences in the calculated maximum pathway yield were the assumed proton stoichiometry for the electron transport chain and ATP synthase; the assumed cofactor specificity of enzymes; the inclusion/exclusion of reactions involved in NADH/NADPH homeostasis; assumed reversibility of reactions; and assumed transport reactions. While the reconstruction of the metabolic network represents the inherent capacity to process substrate into different metabolites and biomass, I also examined how experimental data on concentration of biomass and extracellular metabolites over time for batch cultivation can be used to constrain the input/output to the metabolic network. This data was first processed by determining models to describe concentration over time. Specific rates for growth, glucose consumption, and formation of ethanol, glycerol, and acetate were then calculated from these models. These specific rates were used to constrain fluxes for growth and exchange reactions in the Yeast v7.5 model. The use of lower and upper bounds to the fluxes, instead of equalities, were found to be useful to avoid over-constraining the linear programming problem with incompatible specific rates and to also represent the uncertainty in determining accurate specific rates.