Spatial Patterns Of Drought Vulnerability In Rice-Producing Districts Of India 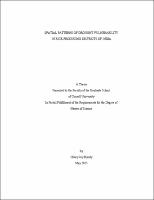 Climate variability is perhaps the greatest challenge facing the smallholder farmer. Abnormal temperatures and inconsistent rainfall can destroy a season's harvest despite optimal farm management and market opportunities. Yet the effects of such variability are not constant across a landscape. This paper provides an investigation into the spatial distribution of drought vulnerability across rice-growing districts in India. We show which regions were exposed to drought from 1999-2008 and determine that rice yields in central and eastern India were most sensitive to the effects of moisture deficit. We explore the effect of certain adaptation strategies in times of drought, finding that irrigation, fertilizer use, and cropping diversity all have a positive relationship with rice yields. The spatial methods employed in this study suggest that there are clear geographic patterns in how districts respond to drought, as well as outliers that seem to be more resilient than their neighbors.