Stability Of Necklace Beams And Femtosecond Filamentation In Water With Impurities. 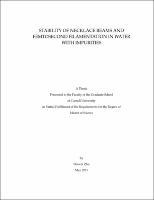 This thesis presents two projects that investigate the nolinear pulse propagation in Kerr media. In the first project, the stability of necklace beams is experimentally and numerically studied. The effects of the size of bead in necklace beams on the propagation are examined. It is also found that the stable propagation of necklace beams is sensitive to the noise of the total bead energy among different beads, but it can tolerate a high level of random noise. In the second project, white light generation in water with impurities is experimentally investigated. White light generation from tap water and distilled water shows almost no difference. This agrees with that the avalanche ionization plays a much less important role in femtosecond filamentation than in optical breakdown. White light generation from distilled water and water-methanol mixture ( 2% methanol) is also measured, and no observable difference was found. This likely indicates that the ionization rates of water and methanol are similar, although their band gaps differ by more than 1 eV.