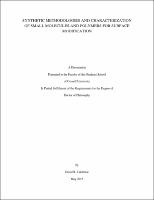 A major problem of naval vessels is the surface fouling caused by marine organisms on any surface exposed to the marine environment. Biofouling leads to increased weight, drag, and noise when ships are underway creating an energy and security penalty. Instead of the toxic paints used currently to partially control fouling, we seek to develop new non-toxic, anti-fouling coatings by controlling the surface energy. In the last few years, there is an increasing amount of evidence that surfaces with amphiphilic character can confer both enhanced resistance to biofouling and improved fouling release. Such an approach is finding its way into commercial coatings. We are designing, preparing, and testing "ambiguous surfaces" chemically patterned at various length scales with different moieties whose chemical functions are selected to hinder settlement and improve fouling release, creating materials that can exceed the current performance of fouling release silicone coatings. Our approach has been to make amphiphilic polymers from block copolymers to which functional groups have been attached. In this dissertation, we discuss different strategies for designing new block copolymers for antifouling applications in terms of synthesizing new side groups, using different block copolymers, and changing the architecture of the surface. These structures were then tested against two different biofouling species to determine the effectiveness for their antifouling and fouling release properties. With these results we can iii gain some insight into creating a more optimized surface, and gain a greater understanding of the mechanisms of biofouling. iv