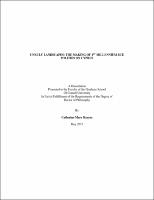 This dissertation is an examination of emerging landscape practices in one region of Cyprus during the early 1st millennium BCE (ca. 1100-700 BCE). The work argues that shifting environmental contexts and social practices co-constituted a re-investment in this region, the Vasilikos and Maroni Valleys of south-central Cyprus, after a period of dislocation at the end of the Bronze Age. This re-investment involved the creation of places for social gatherings, such as cemeteries and ritual spaces, as well as renewed activity in metallurgy, agriculture and water management, and trade. I conclude that the landscape practices that emerged across the island in the 9th-8th c. BCE, while contingent to local contexts, contributed to a shift in the island's political development. The region of focus is both underexplored in the history of archaeology of 1st millennium BCE Cyprus, as well as demarcated as a supposed productive hinterland for two historic kingdoms. This research moves away from understandings of the period that privilege the city and the textual identity of the king (Gr. basileus). I focus instead, through a critical review of our evidence for the mechanics of the Cypriot polity, on the making of settlements and landscapes outside the city and their participation in the formation of diverse forms of social and political organization. I document a shift in the permanence of settlements, the formation of social boundaries, and the engineering of the landscape in the 9th-8th c. BCE, at a time when paleoclimatic proxies (including a new stable isotope analysis of charcoal undertaken in this dissertation) indicate a shift to wetter and increasingly warmer conditions. I employ a relational approach to landscapes in order to examine the intersections of changing climate and developing structures. This study employs an interdisciplinary methodology that integrates spatial analyses of archaeological survey evidence (both archived and surveyed material) and paleoclimatic studies, and moves between the scales of community, region, island, and eastern Mediterranean. The analysis ends with a survey of ancient representations of Cyprus in Greek, Roman, and Near Eastern thought, arguing that certain tropes have affected scholarly interpretations that emphasize the singularity of the Cypriot basileus.