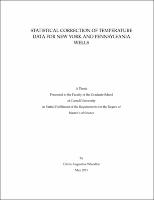 Accurate geothermal resource assessment is critical for identifying areas that are more favorable to geothermal energy development. Temperature data used in geothermal resource assessment is generally taken from oil and natural gas wells. Such data is prone to errors and rarely reflects the equilibrated temperature at the location where the measurement is taken because the drilling process disturbs the temperature field. Hence, adjusting these bottom-hole temperature measurements closer to the likely value is crucial for an accurate analysis of geothermal resources. This thesis develops bottom-hole temperature corrections for portions of New York and Pennsylvania-the western portions of the states. This analysis employs a new database which includes detailed information on over 2,000 wells. The database also includes the well logs available for each well and many other variables reported in the well log headers. Wells that seemed to be reliable based on the information provided in the well logs were identified and combined with wells considered reliable by other authors for a pooled estimate of the bottom-hole temperature over small spatial areas. Regression results show that a temperature correction as a linear function of depth provides a poor fit to the region, but dividing the area between the Allegheny Plateau and the Rome Trough, geologic regions, provided the best fit. The Allegheny Plateau data is explained as a simple function of depth; the Rome Trough data is difficult to explain and the regressions that do explain the data have the opposite of the expected effect. Therefore, the conservative no correction was used in the Rome Trough. Both corrections have the advantage that they are easily applied with current databases once the data is categorized into regions. Using the correction developed in this thesis will generally result in higher thermal gradient estimates. Most of the gains are from not applying negative corrections to shallow data, which is the current practice. Bottom-hole temperature corrections should almost always be positive because the drilling process introduces colder fluids (mud or fluid from shallower strata) to the warmer area at the bottom of the borehole, which causes the rock to cool from its equilibrium temperature. The temperature correction is also higher at for most of the deeper data.