A Conversation with Richard W. Conway 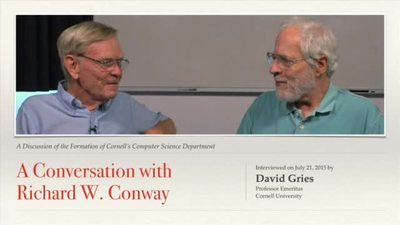 Dick Conway came to Cornell in 1949, as a freshman. He received the first PhD from Operations Research and Industrial Engineering (1958), was instrumental in the creation of the CS Department (1965) and was a founding member, spent two years as the first Director of Cornell’s Office of Computer Services, and later joined the Johnson Graduate School of Management. In all these positions, he made significant contributions. His 1967 co-authored text “Theory of Scheduling” placed the study of production scheduling on a formal foundation. INFORMS lists the book as a landmark in the timeline of Operations Research. He developed and implemented the programming languages CORC (1958) and CUPL (1962). In the 1970’s, he developed and implemented PL/C, with an emphasis on error correction in the compiler, and co-authored a programming text. In the Johnson Graduate School, Dick introduced and implemented the idea of an immersion course, where students took one 15-credit course, “Semester in Manufacturing”, spending half the time visiting manufacturing plants and the other half in the classroom. Dick is a member of the National Academy of Engineering. Dick and David Gries discuss the beginnings of CS at and what it was like in the 1970s. Running Time: 58 min. http://hdl.handle.net/1813/40564