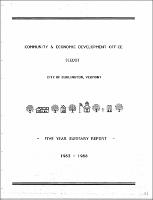 The Five Year Summary Report recounts CEDO's accomplishments in Community Development, Waterfront Development, Housing and Economic Development -- its main departments when set up under director Peter Clavelle in 1983. Bernie Sanders, who had been elected mayor with a broad mandate in 1981, encountered a fragmented and resistant "commission" type structure in city hall, and created CEDO as a more unified structure under his office to accomplish a set of tasks -- selective incentives for business development and affordable housing, and a pressing interest in publicly accessible development of underutilized railroad property on the city's waterfront. This report lays it out in detail -- the foundation for more elaborate steps in later years.