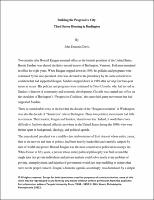 In 1983 John Davis was a member of the technical assistance staff of the Massachusetts-based Institute for Community Economics (ICE) when Brenda Torpy and Michael Monte of Burlington VT’s Community and Economic Development Office (CEDO) contracted with ICE to explore alternative means of keeping housing affordable for the city's low-income residents. Davis went to Burlington the following Spring to assist CEDO and neighborhood activists in laying the foundation for the Burlington Community Land Trust. In 1986, Davis succeeded Torpy as CEDO's Assistant Director for Housing, remaining in that job for ten years. With the vocal support of two Progressive mayors, Bernie Sanders and Peter Clavelle, CEDO managed to transform the city's housing policy, enacting a series of measures for protecting the poor, preserving affordable housing that already existed, and expanding the stock of affordable housing that would remain perpetually affordable. This is the story of how that happened.