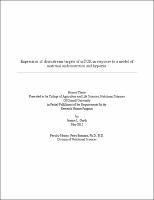 The mammalian target of rapamycin (mTOR) is a key player in a signaling pathway that regulates cell growth in response to nutrients, hypoxia, and other upstream regulators. To examine the effects of nutrient restriction, hypoxia, and their possible interactive effects on placental mTOR, a series of experiments were carried out on immortalized human placental trophoblasts. To assess the temporal response, trophoblasts grown in nutrient replete (complete; C) and nutrient restricted (NR) media were harvested at 0 to 96h; phosphorylated s6 ribosomal protein (s6rp) and eukaryotic translation initiation factor 4E-binding protein 1 (4E-BP1) protein levels were measured using western analysis. To assess the independent and interactive effects of NR and hypoxia (Hx) on mTOR, trophoblasts were grown in C and normoxia (20% oxygen;Nx), C media and Hx (1% oxygen), NR -Nx, NR -Hx and harvested at72h; total and phosphorylated s6rp protein levels were measured using western analysis. NR had a negative temporal effect on phosphorylation of s6rp and 4E-BP1. Maximal change occurred at 48h for p-s6rp and at 72h for p-4E-BP1. NR alone had no effect on total protein expression of s6rp under Nx or Hx, whereas Hx decreased total protein expression of s6rp in C media samples at 72h. NR alone decreased ps6rp but Hx alone had no effect on p-s6rp at 72h. NR and Hx interacted to affect p-s6rp such that Hx reduced p-s6rp in C media but slightly increased it in NR media. The interactive effect of Hx and NR suggest that the mechanisms by which nutrients and Hx affect mTOR signaling have not been fully elucidated, and may shed light on how these two conditions contribute to placental complications such as intrauterine growth restriction and preeclampsia.