LEADERSHIP COMPETITION AND THE CREATION OF NORMS: A CROSS-NATIONAL STUDY OF WEAPONS RESTRICTIONS 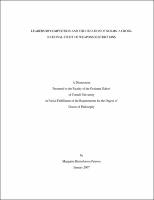 The dissertation explores the processes through which new norms develop in the field of international humanitarian law. In contrast to most studies in International Relations that examine processes of norm diffusion and socialization, the current work focuses on the early stages of norm emergence. Based on the comparison of two cases of norms against weapons that have a severe negative impact on civilians - antipersonnel landmines and cluster munitions - and several country cases, including the US, France, Belgium, Norway and Canada, the thesis develops a model of the dynamics of norm development that emphasizes the linkages among domestic and international processes aimed at norm creation. The model involves scale shifts from the international level where consensus-decision making stalls progress toward adopting new prohibitory norms, to the domestic arena of different countries where nongovernmental organizations (NGOs) mobilize national support, and then back to the international level where national mobilizations help propel a new negotiating process out of the consensus-based forum. Whereas most empirical studies on norm development and the literature on "new diplomacy" examine NGO activities and negotiation processes at the international level, the thesis pays particular attention to the domestic developments and NGO campaigns, which have been a precondition for a more robust international process. The study argues that the success of norm creation depends first on the initial framing of the problem by NGOs, and second on their ability to foster among states a dynamic called "leadership competition" in which a number of countries consecutively adopt more progressive positions in support of weapons bans. The study emphasizes the important role of individual entrepreneurship and links between NGOs and state decision-makers in promoting new norms regarding weapons restrictions. Whereas models of norm diffusion focus on the exertion of pressure on states to accept widely recognized norms through the "mobilization of shame," in the current cases support for a newly emerging norm is generated through the "mobilization of pride" and appeals to state identity and ambitions to play important international roles. Thus, the study identifies new processes and dimensions in the creation of norms that have been neglected by the existing literature.