Soul as Structure: Plato and Aristotle on the Harmonia Theory 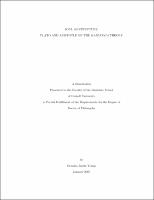 We are conscious beings who think, understand, feel and perceive. We are also material beings composed out of ordinary material stuff. Determining the precise connections between the psychological and the material remains problematic. The harmonia theory is one of the first attempts to frame this as a problem about composite objects. The theory itself is simple: the soul is the harmonia of the material parts of the body. But what a harmonia is and what the theory amounts to are matters of much dispute. I argue that a harmonia is best understood as the structure of the body's material parts. Plato introduces the theory in the Phaedo, and Aristotle mentions it in On the Soul. In both instances it is roundly criticized. Given that Plato thinks the soul is independent of the body, it is not surprising that he rejects the harmonia theory. However, he has been described as "extraordinarily obtuse" for arguing against the view, since doing so seems to undermine his arguments for a tripartite soul. Aristotle's rejection has been thought equally perplexing, since his own positive view (that the soul is the form of a living body) looks very much like a version of the harmonia theory. Looking closely at the harmonia theory helps clarify persistent misunderstandings of the view and the reasons Plato and Aristotle reject it. This avenue offers insight into Plato's and Aristotle's positive theories about the soul and its relation to matter. In addition, their rejections of the theory shed light on how they understand the relation between parts and wholes. The problems lying behind the ancient debate about the harmonia theory are not just historically significant, but also resonate with contemporary discussions about material composition and the metaphysics of mind. Plato articulates a version of the harmonia theory which is perhaps the first expression of a supervenience thesis about the mental, but the precise sort of supervenience at issue hasn't been well understood. But most importantly, whether wholes and souls are causally relevant and whether conscious beings are mereologically simple are issues at the heart of the debate, both ancient and modern.