The Left Periphery, Wh-in-situ and A-bar Movement in Lubukusu and other Bantu Languages 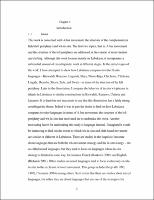 This study examines the structure of the left periphery, wh-in-situ and A-bar movement in Lubukusu, Kiswahili and Runyoro. It is shown in the study that these languages do not show an argument-adjunct asymmetry. With the exception of 'why', wh-adjuncts can occur in-situ in Islands just like wh-arguments. In addition, Lubukusu in-situ wh-adjuncts, except 'why' give rise to an intervention effect, just like wh-arguments. The unique behavior of 'why' does not reflect an argument-adjunct asymmetry. Rather, it follows from the fact that 'why' is base generated in the left periphery. To the extent that there is no argument-adjunct asymmetry, there is little reason to postulate LF-phrasal movement, contrary to Huang (1982). Secondly, it is shown in the study that 'how' has a syntax that is distinct from that of other wh-phrases. For instance, only 'how' obligatorily agrees with the subject. I argue that this is due to the status of 'how' as a functional head that lacks interpretable phi-features. The fact that 'why' but not 'when' and 'where' also lacks interpretable phi-features suggests that the referential ~ non-referential adjunct distinction should be captured in terms of these features. Thirdly, it is shown that wh-phrases can be in-situ in an object Complex NP, but not in a subject Complex NP. I attribute this restriction to Fiengo and Higginbotham's (1981) specificity condition. Fourthly, the study highlights the differences between relativization of subjects and non-subjects. For instance, while the former triggers wh-agreement, the latter doesn't. These differences are attributed to the location of the feature that drives movement under relativization. In the case of subjects, this feature is located in Fin, but in non-subjects, it is located in Force. The former triggers movement to Spec of FinP, the latter, movement to Spec of ForceP through Spec of PredP. A related issue is the structure of the left periphery. The study shows that the left periphery is more complex than is currently assumed. In addition to the functional projections in Rizzi's 1997 structure, two new projections, PredP and PronP are required.