A Conversation with Alice Colby-Hall 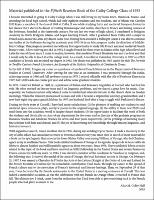 Alice Colby-Hall, Professor Emerita of French Literature in the Department of Romance Studies, received her PhD in French and Romance philology from Columbia University in May of 1962 and began teaching medieval French language and literature at Cornell in the fall of that year. She retired from full-time teaching in 1997, but continued teaching one Old French course per year until the spring of 2005. Her interests include the Old French epic, courtly romance, the history of the French language, and Old Occitan (Old Provençal) language and literature. She is the author of a book on the portrait in twelfth-century French literature and many articles concerning the epics of the William of Orange cycle and recently published an edition and translation into French of the Latin biography of Saint William of Gellone, known as William of Orange in the epics. At present, she is completing a book in French on William of Orange and the epic legends of the lower Rhone valley.