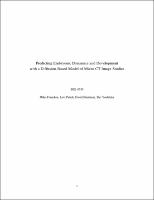 Although the chick embryo has long been used as a model for mammalian embryogenesis, there is a need to understand the changing tissue properties that cause physiological changes. Most imaging techniques have proven inadequate for real-time in vivo imaging of soft tissues. However, Micro-CT technology with gold nanoparticles as contrast agents can be used as an alternative. These nanoparticles readily dissolve into soft tissues and thus mitigate the need to fix samples (Murphy et.al, 2008). Using X-rays to excite these nanoparticles produces 2-D image slices, which can then be combined to create a complete 3-D image. In this study, this imaging technique was coupled with computational modeling to determine the dynamics of tissue properties in chick embryos. Gold nanoparticles were injected into chick embryos, and Micro-CT images were taken at various time points within 24 hours following injection. A novel image analysis technique was then developed and used to quantify the accumulation of the nanoparticles in the myocardial tissue directly from the images. The heart and surrounding pericardial cavity were isolated and approximated as a sphere with a semi-aqueous layer surrounding the sphere, respectively. Using this geometry, a 1-D radially axisymmetric diffusion model was created in COMSOL. A function for diffusivity of nanoparticle in myocardial tissue as well as partition coefficient in the heart lumen were found by minimizing the discrepancy between the model and experimental values. Although the experimental results followed expectations, the model did not match the results. As expected, there was accumulation of nanoparticle in the myocardial tissue, and the rate of this accumulation decreased with time. Optimization of the model yielded a diffusivity function and partition coefficient of xxxx=1.0∗10−14xx−10−7xx and 80, respectively. But, these values corresponded to a total discrepancy of 29.94%. This difference could be attributed to variability in the image processing methods or the computational model. However, analysis of the image processing methods showed robustness and reliability. When three group members independently analyzed ten images, the difference in total mass was less than 5%. Consequently, the contribution of each parameter on the discrepancy was resolved. This was done by performing sensitivity analyses on the parameters. From this, it was clear that, for the diffusivity function of the nanoparticle in the myocardial tissue, the initial diffusivity had a much larger impact on the total discrepancy than the rate of decay. Furthermore, the partition coefficient had a large impact on the total discrepancy. However, the total discrepancy did not differ greatly for values similar to the optimal values. From this, it was evident that changing these parameters would not lead to a lower difference; the study needed to be improved. Possible enhancements include including more experimental data and connecting the heart to other organs in the model, among others.