Inciting the Counter-Revolution: Black Neoconservatives in the Post-Civil Rights Era 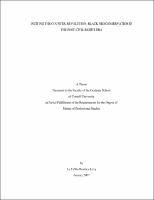