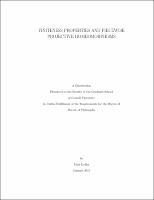 In 1929 the mathematician and physicist John von Neumann isolated an analytic property of groups from the Banach-Tarski paradox. This property is now known as amenability. He observed that groups which contain the free group of rank 2, or F2 , are nonamenable and asked whether all nonamenable groups contain F2 . This was disproved by Ol'shankii [27] and independently by Adyan [2][3] in 1979. The first finitely presented counterexample was constructed in 2003 by Olshanskii and Sapir [28]. In [26] Monod introduced a new family of counterexamples. However, Monod's examples are not finitely presentable (or even finitely generated). In this thesis we will isolate a finitely presentable nonamenable subgroup of Monod's group H(R). (This is joint work with Justin Moore [24].) The group is generated by a(t) = t + 1 together with: b(t) =   t        t   1[-]t  3 [-] 1   t      t + 1  if t [LESS-THAN OR EQUAL TO] 0 if 0 [LESS-THAN OR EQUAL TO] t [LESS-THAN OR EQUAL TO] if 1 2 1 2 [LESS-THAN OR EQUAL TO]t[LESS-THAN OR EQUAL TO]1 c(t) =     2t 1+t  t  if 0 [LESS-THAN OR EQUAL TO] t [LESS-THAN OR EQUAL TO] 1 otherwise if 1 [LESS-THAN OR EQUAL TO] t An isomorphism between the group a, b and Thompson's group F was discovered by Thurston in the late 1970's by considering the reals as continued fractions. We extend Thurston's work to a, b, c , and use this as a combinatorial framework to show the following: Theorem. The group a, b, c is finitely presented with 3 generators and 9 relations. We also obtain a natural infinite presentation, a normal form, and an algorithm for converting a given word to a word in normal form using the relations. Further, we show the following: Theorem. The group a, b, c acts on a connected cell complex X by cell permuting homeomorphisms such that the following holds. 1. X is contractible. 2. The quotient X/ a, b, c has finitely many cells in each dimension. 3. The stabilizers of each cell are of type F[INFINITY] . It follows that a, b, c is of type F[INFINITY] . This provides the first example of a group that is of type F[INFINITY] , nonamenable and does not contain F2 . Monod's technique for proving nonamenability of his groups relies on the nonamenability of the associated orbit equivalence relations. In forthcoming work we characterize all piecewise projective groups of homeomorphisms that are isomorphic to F and study the associated orbit equivalence relations. This thesis also contains the following unrelated construction which gives a new illustration of a phenomenon first exhibited by Brady [6]. Theorem. Let [GAMMA] be the complete bipartite graph with 22 vertices in each set of the partition. There is a subcomplex X of the product [GAMMA] x [GAMMA] x [GAMMA] and a map [chi] : X [RIGHTWARDS ARROW] S1 such that [pi]1 (X) is hyperbolic and the kernel H = Ker([chi]* : [pi]1 (X) [RIGHTWARDS ARROW] Z) is finitely presented but not of type F P3 . In particular, H is not hyperbolic.