Dominican Women'S Experience Of The Interaction Of Food Culture And Environment 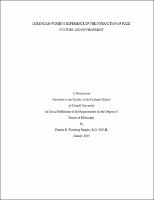 [Worsening diet-related health outcomes with acculturation level suggest that Latino culture has a protective effect that could be harnessed to address diet-related health disparities between Latinos and Non-Latino Whites. However, within the dietary acculturation literature, there is a lack of consensus as to how and why diet changes with acculturation. Research is needed in order to understand and conceptualize the process of dietary acculturation and to identify possible avenues of intervention. The purpose of this grounded theory research was to gain a greater understanding of the food and eating behaviors of Dominican women living in Santo Domingo (SD), Dominican Republic and New York City (NYC). Dominican women, who were purposively recruited in order to capture a range of experiences, participated in two qualitative interviews, addressing usual food and eating behaviors and the ways that they interacted with their food environments. . Three key findings emerged, illustrating the critical roles of food routines, food activity footprints and a cohort effect in shaping food and eating behaviors. Women in SD and NYC described food routines, which included shopping, cooking and eating, that influenced when, how much and what they ate. Women in NYC attributed weight gain after immigration to changes in their food routines. Women's narratives indicated that differences in food routines were related to immigration-related changes in their economic (e.g. employment), social (e.g. household structure) and physical (e.g. food activity) environments Participating women described the establishment of food activity footprints, rooted in their life course experiences, which included all of the places in their urban environments in which they procured food. These footprints differed based on the amount of time and space used when procuring food in SD and NYC. Contextualizing life course events and experiences revealed a cohort effect in which the influence of participants' immigration experiences on food and eating were shaped by the point in history and the point in women's lives at which they immigrated. These findings emphasize how the food and eating practices of participants were related to factors in their social, economic and physical environments. While prior dietary acculturation research has focused primarily on changes in the physical food environment at immigration, the findings of this study suggest a need for reconceptualization of dietary acculturation that includes the social and economic factors, not currently captured in dietary acculturation research, that are equally important contributors to the processes of dietary acculturation and should be incorporated into dietary acculturation research.]