Simulating Surface Air Pollution In The United States: An Examination Of Major Influences And A Diagnosis Of Model Capabilities 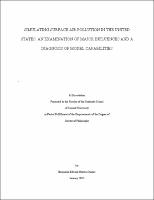 In this dissertation I explore various influences on the surface chemistry in the United States. The research is in three parts: (1) the influence of emissions from Asia on surface ozone mixing ratios in the US using a tracer chemistry scheme; (2) a diagnostic analysis of surface ozone chemistry simulations using a Global Climate Chemistry Model (GCCM) in the US; and (3) an examination of the changing freight transportation patterns and its influence on Black Carbon (BC) surface chemistry in the Midwestern and Northeastern US. For the first part, we find that the Asian influence on US surface ozone chemistry is maximum in the springtime and a minimum in the summertime. This springtime maximum is a result of a low, dispersed plume of Asian pollution entering the air space over North America in the springtime. In contrast, the plume of Asian pollution crosses North American air space in a tighter and higher plume and is inaccessible to surface dynamics which could impact surface ozone. For the second part, we find that overall the CESM CAM-Chem GCCM is capable of capturing many aspects of surface ozone chemistry in the US, especially in the Southeastern and Western US. However, biases result under different sets of paramaterizations in model configurations, which must be accounted for in interpretation of GCCM results, including: (1) a large positive ozone bias when a 26-layer configuration is used and a reduced, but still positive, bias when a 56-layer configuration is chosen; and (2) utilizing online meteorology performs as good as or better when simulated a variety of ozone metrics than a simulation using forced meteorology. In the third part find that although the overall demand for transportation is increasing due to globalization and a fragmentation of the production process, the increases in technological efficiencies and emission factor regulations have resulted in a regionally averaged leveling-off or decrease in BC emissions from 1977 - 2007. The fabricated metal and construction sectors, with generally heavy freight, dominate the emission of BC. Finally, increases in BC emissions in urban centers are increasing as they continue to develop into production and transportation nodes.