Haydn'S Dramatic Dissonances: Chromaticism And Formal Process In His String Quartets, Opp. 9 And 17 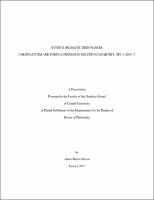 Most scholarship on the string quartets of Joseph Haydn favors the music he composed from Op. 33 (1781), citing evolutionary progress in his style according to limited criteria, such as voice equality and formal symmetry. Looking beyond this historical narrative, I examine Haydn's compositions from the 1760s-70s in greater detail, focusing on the string quartets, Opp. 9 and 17 (1769-71). In these quartets, I investigate how destabilizing shifts to the parallel minor, bold chromatic gestures, and passages of intense chromatic voice-leading are used to disrupt the phrasing and heighten the tension of sonata-form movements, treating chromaticism under the rubric of form-generating dissonance. In so doing, I deemphasize traditional definitions of "sonata form"-long recognized as inadequate for describing Haydn's approach-in favor of highlighting the role of dissonance in the expansion from smaller song and dance forms into larger vehicles for dramatic expression; I have termed this the sonata style. In the sonata style of Opp. 9 and 17, Haydn employs chromatic harmony and voice-leading especially during the act of initial modulation, prolonging the phrasing of his expositions and elevating the musical discourse from simple courtly song and dance to dynamic and psychological tonal process. Evidence from the Haydn repertoire suggests that this combination of chromaticism with formal process began in the string quartets with Opp. 9 and 17.