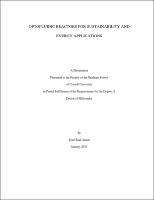 Following the successes of the semiconductor industry in the 1990s, optofluidics emerged from microfluidics when the field was able to integrate liquid waveguides and plasmonic surfaces. Optofluidics is the integration of fluids and lights on the micro or nanoscale and as such is the ideal system to use for solarchemical reactions. Due to rapid economic development and population increase, such solar-chemical reactions, whether photocatalytic or photobiological in nature, can find many applications for energy and sustainability that is investigated in this thesis. First, we introduce a novel micro-fluidic platform to study photocatalytic water-splitting. We demonstrate how carrying out the reaction in an optofluidic environment significantly reduces the material costs and time associated with carrying out these reactions. We use this platform to study the reaction kinetics of PtTiO2 which we find agreed with previous literature. Additionally, we demonstrate that such platforms have the potential to enhance the reaction rates and efficiencies by improving mass transport. To this effect, we show that simply increasing the flow rates yielded at least ~2-fold improvements in reaction rates. We suggest that such an optofluidic platform could be used to rapidly and cheaply perform kinetic studies on different photocatalysts to screen for potential catalysts and optimize their reaction conditions. Second, we design and fabricate light scattering waveguides that uniformly illuminate photo-bioreactors to improve growth of algal cultures. By carefully placing such scatterers on a waveguide in a gradient, we are able to achieve uniform illumination for films that are right on top of the waveguide. This gradient scattering scheme is tested along with other scattering schemes and is shown to be superior both in terms of the uniformity of growth and total coverage resulting in improvements of growth rates of 40%. Our reactors can be easily stacked to enable distribution of light efficiently when stacked in close proximity. Ultimately, we hope this will allow for these types of stacked waveguide photobioreactors to be upscaled. Next, we build and test an integrated hollow fiber membrane stacked waveguide photobioreactor. We use a genetically modified cyanobacteria Synechocystis sp. PCC 6803 strain capable of producing ethylene. We are able to realize that system productivity plateaued with flow corresponding to a "gas-mixing" input energy of close to ~1W/L. In addition, at relatively high light intensities, we are able to show average to peak productivities of close to 90% for an aerated gas stream with 1% CO2. Growth experiments at lower light intensities and higher light intensities yield 65% and 33% improvement in plateau productivities respectively. In addition, we show a two-fold increase in growth ramp rates with carbonated gas streams, and close to 20% output improvement across light intensities in reactors loaded with high density cultures. Finally, we demonstrate a novel photocatalytic reactor for water cleaning with augmented mass transfer and optical transfer characteristics for high-capacity applications. We use a TiO2 sol-gel to create a porous thin film of catalyst and stack the layers closely to improve mass transport. In addition, we use light scattering waveguides in gradient formation to enable uniform illumination across the length of the waveguide. We achieve 67% degradation of the Methylene Blue dye at 10mL/min capacity and show a 4.5-5 times improvement over typical waveguide light delivery configurations. The degradation rate constant is characterized in flow rate experiments and shown to be between 0.37 - 0.54 min-1. This design could in theory be upscaled for high-capacity water treatment applications.