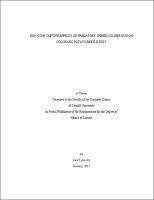 Although the lethal effect of predators on their prey is well established, we know little about how prey in terrestrial insect systems perceive and respond to non-lethal predation threat (non-consumptive effects). By investigating the relationship between the Colorado potato beetle, Leptinotarsa decemlineata and its predator, the spined soldier bug, Podisus maculiventris, we examined prey behavioral responses when there was a risk of predation as well as the mechanism of prey perception of predators. When exposed to predation risk, beetle adults and larvae reduce their feeding. This effect was still present when larvae were exposed predator volatiles alone. Further, adult beetles reduced oviposition in the presence of non-lethal predators. These results are particularly interesting in attempting to understand the full effect of predators, like the spined soldier bug, as biological control agents in agricultural systems.