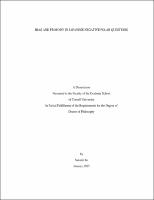 This dissertation investigates the correlation between prosody and the speaker's bias in Japanese negative polar questions (henceforth, NPQs) without a sentence final particle. I argue that the prosodic contrast of the negative morpheme -na'i between accented and deaccented variants is correlated with the presence or polarity of the speaker's epistemic bias: while NPQs with deaccented -nai (P-type NPQs) often convey positive epistemic bias, NPQs with accented -na'i (NN-type NPQs) convey negative epistemic bias or represent that the speaker has no epistemic bias. In this respect, Japanese NPQs show a bifold difference with English NPQs, in the way they express the polarity of bias, and in the way they divide NPQs into subgroups. Some evidence is given to show that the prosodic patterns in Japanese NPQs are neither accidental nor in free variation, but rather intimately and robustly related to distinctions in the speaker's bias. Also, a case where the prosodic contrast disappears is discussed. I reject the analysis which claims that the prosodic contrast is due to post-focus pitch reduction, and argue that the contrast is due to deaacentuation, a phenomenon which should not be identified with is demonstrably distinct from post-focus reduction. I also discuss the non-truth-conditional aspect of the meanings of Japanese NPQs (e.g. bias). I argue that NN-type NPQs (those with negative bias) and P-type NPQs also demonstrate epistemic bias (concerning belief or expectation) and desiderative bias (concerning desire). I clarify several conditions which are required for each type of Japanese NPQ to be asked felicitously to convey a specific kind of epistemic bias ("epistemic" here is the general term independent of specific modal flavors). These findings point to directions for further work on other types of Japanese NPQs. I also introduce the results of two types of experiment, a naturalness rating test and a comprehension test, which were conducted to support my claim concerning the correlation between prosody and bias in Japanese NPQs. I show that the results are consistent with those claims.