Mechanotransduction And Therapeutic Targeting Of Cells In The Circulation 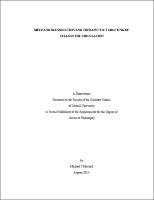 The application of fluid shear stress on leukocytes and tumor cells in the circulation plays a critical role in the progression of inflammation and cancer metastasis, respectively. Specifically, fluid shear forces are known to help mediate selectin-based interactions between endothelial cells and circulating cells such as tumor cells and leukocytes, which can lead to their subsequent transmigration into tissues. However, how fluid shear forces induce mechanotransduction in circulating cells remains largely unknown, and could provide insight into potentially controlling pathological conditions such as inflammation and metastasis for therapeutic purposes. Herein, fluid forces are shown to exert control over how leukocytes respond to inflammatory agents found in the circulation. Leukocyte pre-exposure to fluid shear stress was found to suppress early leukocyte activation in the presence of the bacterial peptide fMLP, as indicated by reductions in selectin adhesion molecule shedding, integrin activation, and cell morphological changes. Conversely, leukocyte exposure can also increase leukocyte activation in the presence of platelet-activating factor, a molecule typically upregulated during vascular injury. Utilizing the same in vitro system, tumor cells became sensitized to the apoptosis-inducing ligand TRAIL in the presence of fluid shear stress conditions of the vasculature. This effect is not witnessed upon tumor cell treatment with the commonly utilized chemotherapeutic doxorubicin, which enacts its therapeutic effect via DNA intercalation. Results from this work suggest that TRAIL is well suited for systemic delivery, and that receptor-mediated apoptosis in general could be an ideal approach for circulating tumor cell therapies. The unique apoptotic effects of TRAIL in the presence of fluid shear stress were then exploited to develop a novel nanoparticle platform for therapeutic targeting of cancer cells in the circulation in vivo. Specifically, E-selectin functionalized liposomes were effective at rapidly targeting and adhering to cancer cells under shear stress conditions in the circulation, while also delivering therapeutic cargo. Utilizing both E-selectin and TRAIL, a nanoparticle platform was developed to functionalize circulating leukocytes of the bloodstream in attempt to neutralize circulating cancer cells. This approach, demonstrated in vitro with human blood and also in the circulation of mice in vivo, mimics the cytotoxic activity of natural killer cells and increases the surface area available for delivery of the receptor-mediated signal. The resulting "unnatural killer cells" hold promise as an effective means to neutralize circulating tumor cells that enter blood with the potential to form new metastases.