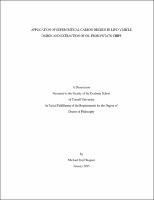 Supercritical carbon dioxide (SC-CO2) has emerged as a non-toxic and environmentally friendly alternative to conventional organic solvents with many applications. A novel method of nonionic surfactant based lipid vesicle (niosome) production coupling a gas ejector with the rapid expansion of a supercritical solution was studied. Niosomes were prepared using Tween61, which was shown to be 4-6% soluble (wt. basis) in SC-CO2 ranging from 40 to 60°C and 10 to 20 MPa, and cholesterol at a 1:1 molar ratio. Niosome lamellarity was shown to depend on the degree of precipitation of the lipid formulation at the point of aqueous cargo introduction. Niosome particle size distributions were bimodal, with the 80-99% of the liposomal volume contributed niosomes ranging in size from 3-7 [mu]m and the remaining niosomes ranging from 239-969 nm, depending on the system configuration. Using the gas ejector for cargo introduction, the maximum encapsulation efficiency of a 0.2 M sucrose solution was 28%. Niosome size and encapsulation efficiency were shown to be influenced by aqueous cargo droplet formation and the aerodynamic forces of the expanding gaseous stream. Simultaneous encapsulation of ferrous sulphate and cholecalciferol achieved encapsulation efficiencies of 25.1 ± 0.2% and 95.9 ± 1.5%, respectively. Niosomes showed good physical stability at 20°C, but storage at 4°C showed an initial burst release of ferrous iron, indicating possible rupture of the niosomal membrane. Extraction of oil from potato chips was investigated as a means for the simultaneous production of low fat potato chips and flavor extract. Extraction conditions range 27.6-41.4MPa, 35-80°C and solvent flow rate of 0.5-5.0g CO2/min. Up to 100% of the oil was recovered from the potato chips at the highest pressure and temperature conditions. Two process conditions were chosen for comparison of performance with a larger scale (1:5) system, maintaining the same CO2 flow rate to feed mass ratio with Good agreement between scales observed at the higher pressure and temperature settings. Kinetic parameters, calculated using a literature model, indicated that the extraction was limited by internal diffusion. Costs associated with the process were assessed using a method described in the literature.