The Evolutionary And Clinical Significance Of Regulatory And Mitochondrial Genetic Variants 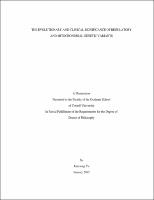 Genetic adaptations to local environment during evolution shaped the human genome. Identifying evolutionarily important genetic variants is clinically significant because the mismatch between our slow-evolving genome and the cultural upheaval underlies many diseases of civilization. Recent sequencing technology advances start a Genomic era and promise to elucidate the genetic basis of human health and disease. While most attention had been drawn to protein-coding genes in the nuclear genome, regulatory regions and mitochondrial genome were much less studied. My research aims to investigate the evolutionary and clinical significance of these two categories. Starting my research, I summarized the latest advances in understanding the role of nutrition in human genome evolution and introduced to the Nutrition field population genomics approaches to identify dietary adaptions. My first research project examined the adaptation of regulatory variants to 42 environmental factors. With a newly developed environmental correlation method, I found that expression QTLs are enriched in signals of environmental adaptation and regulatory adaptation are especially important for some environmental factors, like climate, and for some biological pathways, including immune and metabolic pathways. My second project was a case study to test a hypothesis that an Asian-common haplotype was adaptive to the plant-based diet in Asia by enhancing non-heme iron absorption. With an iron absorption study involving 57 Asian women volunteers, I found that consistent to our hypothesis homozygous carriers of the adaptive haplotype absorbed 22% more non-heme iron than non-carriers. Intriguingly, I also observed that compared to Caucasian women, Asian women absorbed more non-heme iron even in face of higher iron store. My third project utilized the next-generation sequencing data from the 1000 Genomes Project and investigated the prevalence and clinical relevance of mitochondrial DNA (mtDNA) heteroplasmy, the presence of multiple versions of mtDNA in a cell. I found that about 90% healthy individuals carry at least one heteroplasmies and at least 20% individuals harbor disease-associated heteroplasmies. I demonstrated that heteroplasmic mutations are highly pathogenic and subject to weak negative selection. My research suggests that heteroplasmic mutations may drift to high frequency across life-span and contribute to age-related diseases.