87Sr/86Sr, Ca/Sr, And Ge/Si Ratios As Tracers Of Solute Sources At A Temperate Forested, Shale Catchment In Central Pennsylvania 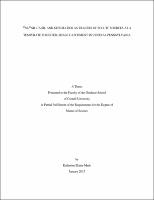 Weathering processes, governed by dissolution kinetics as well as by the rates and directions of flowing water, are important mechanisms through which solutes are added to watersheds. Flow pathways control the fate and transport of incoming precipitation inputs and consequently, influence water-rock interactions, degrees of weathering, and distributions of solutes in watersheds. Furthermore, plants directly impact the availability of solutes in soil and porewater reservoirs through infiltration, evapotranspiration, decomposition, and preferential discrimination processes. To this end, strontium isotope ratios (87Sr/86Sr), elemental ratios (Ca/Sr, Ge/Si), and elemental concentrations are used to document sources of solutes at a temperate forested, shale catchment in central Pennsylvania. Spatio-temporal patterns are assessed and inferences are developed using empirical data supplemented by observations on mineral weathering, proposed preferential flow pathways, and plant transport mechanisms at the catchment. In particular, this study entails a comprehensive analysis of calcium, strontium, silicon, and germanium sources in plant leaves and sap waters and in streamwaters, groundwaters, soil porewaters, exchangeable soils, and bedrock in order to investigate hydrological (preferential flow pathways), topographical (hillslope geometry), biological (evapotranspiration, decomposition, and plant preferential discrimination), and mineralogical (dominant weathering inputs) controls on their availability and distribution at the watershed. For soils and soil porewaters, spatial patterns in chemistry largely reflect lateral and vertical preferential flow processes which influence solute residence times and the transfer of weathering products either in the soil profile or to downslope locations. As such, topographic gradient plays a circumstantial role in lateral subsurface transport processes downslope. Furthermore, biological activities including plant preferential discrimination, decomposition, and evapotranspiration impact near surface spatial patterns and in particular, temporal patterns in soil and soil porewater chemistry. Although solutes in soils and soil porewaters at ridge top and mid slope locations are largely derived from silicate mineral weathering, influences of carbonate dissolution processes on calcium and strontium are rather significant at valley floor locations where recharge of carbonate affected groundwaters is probable. Strontium isotope ratios in soil reservoirs correspond closely to those in leaves which is consistent with the rapid homogenization of solutes added from weathering and atmospheric sources by biological nutrient cycling processes. Controls on spatio-temporal patterns in leaf and sap water chemistry are predictably similar to those observed for soils and soil porewaters, from which these reservoir components are largely acquiring solutes. However, plant transport mechanisms through the xylem are also important where apoplastic passive transport is suggested for calcium and strontium, while a coexistence of active and passive transport mechanisms either through apoplastic or symplastic pathways is hypothesized for silicon and germanium. As to the site of elemental partitioning, minimal discrepancy between leaf and sap water Ge/Si ratios, where Ge/Si ratios for both are significantly lower than those for soil porewaters, suggests that partitioning between germanium and silicon precedes phytolith formation and occurs in the transport from the endodermal cell layer (and casparian strip) to the xylem stream either during plant uptake or soon thereafter. Conversely, Ca/Sr ratios in sap waters are shown to correspond more closely to those in soil porewaters with elemental partitioning occurring further down the transpiration stream as supported by observations of significantly higher Ca/Sr ratios in leaves compared to soil porewaters. Groundwater and streamwater chemistry is largely governed by mineralogical processes. In groundwaters and weir streamwaters, carbonate dissolution processes are shown to be rather important sources of calcium and strontium, while primary weathering of silicate minerals imparts influences on silicon and germanium chemistry. However, stream headwaters are ephemeral and highly responsive to inputs from atmospheric sources for calcium and strontium and to hydrological processes which add silicon and germanium to streamwaters through flushing by infiltrating precipitation of soil porewaters into streamwaters at these locations. Mid streamwaters integrate sources of solutes at weir and stream headwater locations. Diagenetic carbonates at the catchment are reflective of both ankerites and calcites with carbonates at the ridge and valley likely originating from different strata as a result of the heterogeneous lithology of the Rose Hill formation. The rate of carbonate propagation well exceeds those estimated for regolith production and erosion and is consistent with the greater depth inferred for the carbonate weathering front at the catchment. Strontium isotope ratios for silicate fractions of drill core samples suggest that bedrock is, indeed, shale and that calcium and strontium release through weathering is likely from leaching of less radiogenic feldspars at interlayer and adsorption sites of clay minerals. Furthermore, Ge/Si ratios for drill core samples agree to values for shale where silicon and germanium release through primary weathering of silicate minerals is supported by observations of lower Ge/Si ratios, relative to unweathered bedrock, in streamwaters, groundwaters, and soil porewaters unaffected by plant activities.