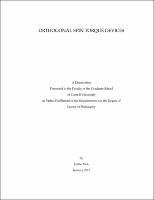 Spin transfer torque (STT) based magnetic memory has been suggested as a potential cryogenic memory that can work in conjunction with a Josephson junction based logic device. Conventional spin transfer (CST) device, which employs a spin polarizer with its magnetization collinear with that of the free layer, has been shown to be too slow to be integrated with a Josephson junction device. On the other hand, orthogonal spin transfer (OST) device, which employs out-of-plane polarizer, as well as an in-plane polarizer, can be switched in the sub-nanosecond, t p [LESS-THAN OR EQUAL TO] 100 ps regime. The orthogonal spin polarization of the spin-polarized current injected by the out-of-plane polarizer ensures that the STT is maximized during the switching process. A persistent problem with the OST device, however, has been the low switching reliability. In my experimental works on low temperature OST device, I have demonstrated that the switching reliability issue can be resolved by enhancing the effective spin polarization of the in-plane polarizer. Using macrospin analysis, I have shown that the spin accumulation between the free layer and in-plane polarizer can account for the apparent enhancement of the spin polarization. Furthermore, I have outlined methods to improve the free layer, namely decrease the effective demagnetization field, so that reliable switching can occur in an OST device even in the absence of spin accumulation. My macrospin analysis of the spin-orbit torque (SOT) driven switching of the perpendicularly magnetized free layer has shown that it is possible to achieve fast sub-nanosecond switching, demonstrated in the OST devices, in this SOTdriven device as well. The damping-like torque component of the spin-orbit torque can excite the free layer efficiently to achieve fast switching. The SOTdriven device however shares similar switching reliability issues found in an OST device. I have proposed that either an increased damping of the free layer or significant field-like torque can solve the issue. I studied the SOT in a Tb-CoFe/heavy metal bilayer structure to determine if the material can be used to realize fast switching in a SOT-driven device. TbCoFe alloys have been shown to exhibit extremely large magnetic damping, as well as reduced saturation magnetization due to their ferri-magnetic ordering, making it an ideal choice as a free layer in a SOT-driven device. Measurements of effective fields in the bi-layer structure has revealed that, in addition to the aforementioned benefits, the strength of the SOT in the bilayer increases linearly as the anisotropy strength of the TbCoFe layer.