Tipping The Scales Of Justice: The Role Of Organized Citizen Action In Strengthening The Rule Of Law 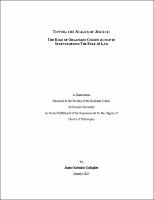 Most countries are not able to hold guilty parties responsible for violating people's most fundamental right - the right to life - most of the time. Some cases of violations, however, do progress through the justice system, and have perpetrators, including state officials, sentenced. Why do some cases progress while others do not? And what can this question teach us about how justice is achieved and the rule of law strengthened? I argue that organized citizen action - protests, media campaigns, meetings with state investigators, collaboration with international allies, and national and international litigation and advocacy - is the key to understanding why some cases progress within judicial systems that otherwise guarantee virtual impunity. Using a multi-methods, multilevel research design, I present evidence from Mexico and Colombia that organized citizens can play a decisive role in the judicial treatment of grave crimes, specifically enforced disappearance and murder. I show that cases in which victims of violence and their advocates both mobilize and negotiate directly with state investigators yield significantly better judicial outcomes than similar cases in which there is no organized citizen action. I find that two types of citizen action are key to breaking patterns of impunity, or freedom from punishment. First, activists must apply focused political pressure targeting impunity. Second, advocates must bridge the gap of trust between the state and victim. Scholars and policymakers concerned with improving judicial outcomes and the rule of law largely focus on investing in institutional strength, professionalizing the legal bureaucracy, and legal reform. In contrast, I hone in on how judicial actors respond to mobilization outside of formal political institutions. I argue that these officials respond to political pressure exerted by domestic and international actors, and can be incentivized to form collaborative relationships with victims of violence and their advocates. When judicial officials are embedded in victim advocacy networks, legal outcomes improve. By focusing on the micro-processes of investigations and the relationships and dynamics between organized citizens and the state, I bring activists and advocates into the picture as agenda setters and motivators for justice and stronger rule of law.