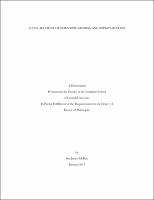 I present a new account-the Structure-Representation Account (SRA)-of scientific models and approximations. Existing accounts of the nature and use of scientific models fail to fully accommodate the diversity of actual models and modeling practices. My account, I argue, succeeds where the others fail. I show that I can accommodate not only the heterogeneity in models (concrete, mathematical, graphical, among others), but also certain standard modeling practices that have been ignored in the literature. I also disambiguate the term 'model', sometimes used in the literature in the sense of scientific model (the subject of my dissertation), sometimes in the sense of the logician's model-theoretical model: often these two senses are conflated, especially when related to the "semantic view" of scientific theories. I explore two general topics in depth: the relationships between different models, and the relationships between models (and theory) and the world. There can be several models of a single phenomenon; a single model that seems to be applicable across different phenomena; models applicable at different scales-different levels of description-that interact to enable successful modeling, when the models in isolation prove inaccurate or intractable; and successive models, modifications to particular models over time. Why should models constructed based on different theoretical grounds turn out to be similarly successful, or be suitable for interaction in parallel computations? How are we to understand in such cases a correspondence with theory and the world? How are the phenomena and models connected? I use the SRA to address these issues. Expanding on the case of successive models, I defend scientific realism against the still-common pessimistic meta-induction and its contemporary variants. Finally, using the case of Valence Bond theory and Molecular Orbital Theory, I develop a notion of approximation from the SRA.