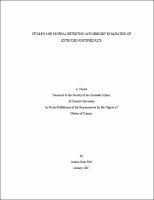 More than 2 billion people suffer from micronutrient malnutrition worldwide. Vitamin A, iron, iodine, and zinc deficiencies are among the leading public health concerns for developing countries, particularly in Sub-Saharan Africa and many parts of Asia. Strict vegetarian diets, lack of diversity in the diet, high rates of infection, and unfavorable socio-economic conditions are risk factors for these deficiency conditions. In India alone, approximately 75% of children under the age of five suffer from iron deficiency, and 57% of children under the age of six suffer from sub-clinical vitamin A deficiency. Micronutrient deficiencies bring adverse consequences to their victims and the economies of the countries in which they live. Fortification has proven to be an effective long-term nutrition intervention strategy, and rice has emerged as a staple food with much potential as a food fortification vehicle. Rice provides 50% of calories for more than half of the world population. However, a lack of micronutrients in white rice has become a problem for countries with high consumption rates of rice. Low intakes of iron, vitamin A, and iodine are a major concern, while low zinc intake is also a problem. An experimental product, extruded rice kernels manufactured from rice flour fortified with vitamins and minerals, has been proposed as an effective vehicle for delivering a variety of micronutrients to low income populations. The aims of this study were 1) to select and adapt analytical methods and conduct analyses for vitamin A and vitamin C in the experimental product, as well as measure mineral retention, and 2) to conduct sensory studies to evaluate the acceptability of the experimental product by consumers and compare acceptability by South Asian consumers to that of non-South Asian consumers. Extruded rice samples fortified with vitamins A and C and iron and zinc were evaluated for their micronutrient retention following extrusion and cooking. The average vitamin A retention in the experimental product after extrusion was 48% for dried kernels and 37% for cooked rice. The average vitamin C retention in the experimental product after extrusion was 52% for dried kernels and 48% for cooked rice. Iron and zinc retentions both averaged 84% for rice kernels after extrusion (cooked and non-cooked data combined). The vitamin retentions are consistent with studies on vitamin retention in extruded products. However, mineral retention is lower than expected. Larger sample sizes, consistency in analysis methods, and more research are needed to draw further conclusions. The experimental product was also evaluated for its consumer appeal using consumer acceptance tests. For the acceptability evaluation, two extruded samples of rice (fortified and unfortified extruded rice), and two commercial samples of enriched rice (long-grain white rice) were cooked in a rice cooker and presented to taste panelists. Acceptability of the product was based on a 9-point hedonics test, a just-about-right (JAR) test, and a ranking test. Results suggested greater acceptability by the consumer panel for commercial rice samples. The most sizable difference was seen in the appearance attributes, followed by overall acceptance, and aroma. The addition of vitamins and minerals to extruded rice did not appear to have a large effect on sensory acceptability, with the exception of several appearance attributes. Group differences and group interactions were observed. The South Asian panelist group gave lower scores in several attributes, and the group was generally more critical of (gave lower ratings to) the unfortified extruded rice sample and the parboiled commercial sample than the non-South Asian group. Rice with extruded fortified kernels has potential to be an effective vehicle for fortification in developing countries; however, the challenges in micronutrient retention and acceptability need to be met for optimized utilization.