The Coroplastic Art From Sardis: Emergence And Development Of Local Traditions 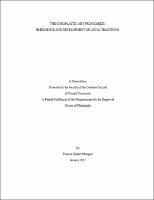 This dissertation focuses on the coroplastic production of the archaeological site of Sardis in western Anatolia. It addresses key issues of manufacture, function, and iconography of terracotta figurines that were recovered from a broad range of contexts, and that span, chronologically, from the Archaic to the Modern period. It concludes that the site was a production center for terracotta statuettes during most of its history, and that its local traditions were firmly grounded in the practices of the larger Mediterranean. Although the Sardian coroplastic corpus is somewhat narrow, rather than feeling circumscribed by scant data, I suggest that when working with fragmentary or ambiguous material one should still offer and analyze possible distinct scenarios that explain its form, function, and meaning; although these explanations would remain within the realm of conjecture, they should be attempted, and a certain freedom of exploration encouraged. Special attention is given to the haptic qualities of figurines. During the majority of the periods under study, figurines were not just made to be looked at, but it was intended that they be touched and manipulated. It is likely that their easy malleability made them particularly successful political objects, and that people could effectively use them to represent, nourish, or challenge their relationships with others. Although a handful of the figurines from Sardis had previously been examined and published, a comprehensive study and analysis of the site's entire excavated corpus had not yet been executed. This dissertation, and the appended catalogue that presents the detailed data collected on 400 artifacts, makes available the figural terracottas of the site as comparative material for coroplastic studies elsewhere.