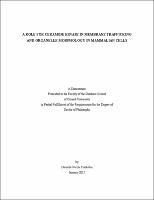 The correct functioning of the cell, and hence a multicellular organism, is dependent on proteins and lipids reaching their proper destination at the correct time. Intracellular trafficking is the predominant regulated process by which these materials are transported between various organelles. In route, material is transferred via vesicle and membrane tubule carriers. Previous work from our lab and others have demonstrated that the formation of these carriers are dependent on localized changes in membrane curvature, which is generated by phospholipid modifying enzymes such as lysophospholipid acyltransferases and phospholipid lipases. While our understanding about these carrier intermediates has greatly advanced over the years, many questions remain unanswered. One such question is how cargoes are marked to traffic via a vesicle or a membrane tubule. Aiming to uncover kinase regulators of Golgi membrane tubule formation, our lab conducted a kinome-directed RNAi screen in mammalian cells. Through this screen ceramide kinase, or CERK, was identified as having a positive role in Golgi membrane tubulation. CERK phosphorylates the sphingolipid ceramide to produce ceramide-1-phosphate (C1P). The studies to date indicate CERK and/or C1P may have roles in eicosanoid production and phagolysosome function. However it is unclear whether this is a direct effect of CERK/C1P or is secondary to more fundamental changes in intracellular functions and pathways as indicated by our RNAi screen. The role of CERK in intracellular endolysosomal trafficking and membrane   tubulation at the Golgi complex and early endosomes were investigated. By utilizing overexpression and knockdown experiments in conjunction with microscopy-based trafficking assays in mammalian cells, I discovered that CERK activity positively affects membrane tubulation at the Golgi complex and early endosomes. Furthermore, CERK influences endolysosomal morphology without affecting compartment identity, through both catalytic and non-catalytic means. Finally, CERK negatively influences the endocytic trafficking of cholera toxin. Evidence from my studies adds to our understanding of CERK function and will aid in directing future research into the specific biological roles of CERK. Ultimately, further studies are warranted to refine our knowledge regarding CERK function in intracellular trafficking and membrane tubulation.