Your Brothers, The Children Of Israel: Ancient Near Eastern Political Discourse And The Process Of Biblical Composition 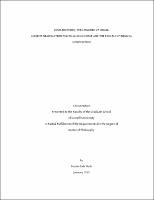 The Hebrew Bible contains seventeen isolated passages, scattered from Genesis to 2 Samuel, that use the Hebrew term ‫"( אח‬brother") to define an inter-group relationship between two or more Israelite tribes. For over a century, biblical scholars have interpreted this terminology as conceptually dependent on the birth narratives and genealogies of Gen 29-50, reiterated in stories and lists elsewhere in the biblical corpus. However, examination of the Bible's depiction of the Israelite tribes as "brothers" outside these seventeen passages indicates that the static genealogical structure of the twelve-tribe system constitutes a late ideological framework that harmonizes dissonant descriptions of Israel as an association of "brother" tribes. Significantly, references to particular tribal groups as "brothers" in the Mari archives yields a new paradigm for understanding the origins of Israelite tribal "brotherhood" that sets aside this ideological structure. Additionally, it reveals the ways in which biblical scribes exploited particular terms and ideas as the fulcrums for editorial intervention in the Hebrew Bible's composition. More specifically, close analysis of these Akkadian texts reveals the existence of an ancient Near Eastern political discourse of "brotherhood" that identified tribal groups as independent peer polities, bound together through obligations of reciprocal peaceful relations and supportive behavior. A detailed examination of Judg 19-21 brings to light a textual core that uses the word ‫ אח‬in this precise situated meaning, indicating that the original source concerned a war between Israel and Benjamin as separate polities of parity status. The polysemic character of ‫ אח‬allowed later scribes to incorporate this textual tradition by reorienting the term's situated meaning to fit evolving ideologies of Israelite and early Jewish identity in a manner that is detectable in additional biblical passages.