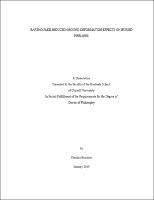 The primary subject of this thesis is the evaluation of pipeline performance during earthquakes through analytical and experimental studies, spatial analysis, and probabilistic methodologies. Permanent ground deformations caused by liquefaction are also addressed through spatial and statistical analysis, and are compared to foundation deformations caused by liquefaction effects estimated through building damage surveys. This thesis starts with a comprehensive analytical and experimental assessment of segmented pipeline response to transient ground deformation before and after rehabilitation with in situ lining technologies. The different modes of segmented pipeline deformation caused by seismic wave propagation are investigated through finite element analyses to show that the most prominent form of deformation at weak pipeline joints and circumferential pipe cracks are in the axial direction. They exceed the levels of all other forms of pipeline deformation by several orders of magnitude. Nonaxial deformations have negligible effects on pipeline performance under seismic body wave propagation. Pipeline performance after rehabilitation with in situ linings is studied through large-scale testing and the effectiveness of in situ lining technology for seismic retrofit of critical lifelines is evaluated. Pipeline performance during earthquakes is also investigated through spatial analysis of the Christchurch water distribution system response to transient and permanent ground deformations during the 22 February 2011 Christchurch earthquake, New Zealand (NZ). Repair regressions for different pipe types are developed using spatial data sets that are unique in size and complexity, including dense array ground motion records, detailed mapping of areas affected by soil liquefaction, as well as spatial data sets for the water distribution system, geocoded repair records, and high resolution Light Detection and Ranging (LiDAR) measurements of vertical and horizontal movements. This study expands on previous work in several important ways, and provides a detailed framework of the analytical processes for repair regressions that assists in future investigations with data of similar size and complexity. A probabilistic model is presented in which the expected value of the ground strain in the axial pipeline direction within a strain field is calculated by assuming that pipeline orientation with respect to the strain field is uniformly distributed and by accounting for possible differences in tensile and compressive strains with a weighting factor. The proposed methodology is applied in regression analysis of pipeline damage caused by lateral ground strains during the 22 February 2011 Christchurch earthquake, NZ, and can be used for future investigations to improve the assessment of ground strains affecting segmented pipelines. Permanent ground deformation during the 2010-2011 Canterbury Earthquake Sequence, NZ, is evaluated through statistical analysis of vertical and lateral ground displacements, as well as differential vertical displacements and lateral ground strains, calculated from high resolution LiDAR surveys. Ground deformation patterns are identified with respect to topographic characteristics through the use of LiDAR ground displacement measurements. Foundation deformations caused by liquefaction effects are estimated using damage survey data in residential properties in Christchurch and are evaluated with respect to liquefaction-induced ground deformations.