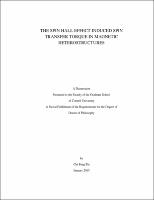 The spin Hall effect (SHE) induced spin current in some certain heavy transition metals has been shown to impose spin transfer torque (STT) upon an adjacent magnetic layer strong enough to excite magnetization switching and/or magnetic oscillation therein. The similarities and differences between this new paradigm and the traditional route of spin generation will be the main focus of this dissertation. Firstly, these phenomena stemming from the SHE can be viewed as a reminiscent of the traditional spin-torque generation from a ferromagnetic layer in spin-valve-like devices, except that now the source of the STT is coming from the normal metal (NM) layer instead of the ferromagnetic (FM) spin-polarizer in those traditional devices with sandwich structures (FM/NM/FM or FM/Insulator/FM). In this fashion, essentially only one layer of ferromagnetic layer is required as the read-out means. In the first part of this dissertation, I will show that this detection of the spin-Hall response can be done either via anisotropic magnetoresistance (AMR), anomalous Hall effect (AHE), or planar Hall effect (PHE) in a simple NM/FM bilayer structure. By analyzing the data from both high and low frequency measurements, the spin Hall angle, which represents the strength of the SHE, from various transition metals are estimated. Secondly, the symmetry of the SHE, from which the resulting spin current is transverse to the applied charge current, allows us to design STT devices using in-plane charge current (CIP) instead of the traditional utilization of current-perpendicular-toplane (CPP) architecture. This facilitates the realization of a new three-terminal device, which eventually leads us to a prototype of magnetic cross-point nonvolatile memory. By studying the SHE-STT switching from beta-Ta and beta-W-based three-terminal devices, I will confirm that the spin Hall angle of [beta]-Ta and [beta]-W are respectively [ALMOST EQUAL TO]-0.15 and [ALMOST EQUAL TO]-0.30, which are consistent with the results from the first part of this work. The strong SHE from these transition metals can also be adopted to modulate spin-waves and will be shown at the end of this section. Lastly, the adaptation of a CIP architecture means that the spin-charge transport properties in the spin Hall devices are, per se, more complicated than that in their CPP counterparts. The interface(s) as well as the bulk properties in these magnetic heterostructures both play important roles in determining the final spin transport properties, thereby the effective spin Hall efficiency. In this final section, I will present the variation of the current induced damping-like torque and field-like torque in NM/(spacer)/FM heterostructures, from which the possible interplay between interface(s) and bulk, as well as their relative contributions, can be estimated.