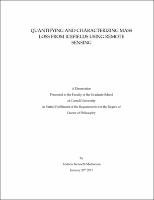 Glaciers outside the icesheets currently supply roughly the same amount of water to sea level rise (SLR) as Antarctica and Greenland and will likely constitute a significant fraction of SLR through 2100. SLR is one of the biggest challenges facing humanity, and much uncertainty remains regarding the contribution of glacier mass loss to SLR. Here we examine glaciers in the Patagonia region of southern Chile/Argentina, the Russian High Arctic (RHA) and Alaska, which have all contributed disproportionately to SLR, a trend that is expected to continue through 2100. The RHA is projected to be among the largest contributors, with total mass loss exceeding Alaska for 2006-2100 despite its smaller ice volume. We focus on several icefields, including two that have received relatively little attention, the Cordillera Darwin Icefield (CDI, 69.6? W, 54.6? S, 2,600 km2 of glaciated area) in the Patagonia region of southern Chile, and the Novaya Zemlya Icefield (NovZ, 65? W, 76? N, 22,100 km2 of glaciated area) in the Russian High Arctic. We also examine the Juneau Icefield (JIF, 58.3? N to 59.7? N, 3,830 km2 ) and Stikine Icefield (56.75? N to 58.5? N, 5,800 km2 ) in southeast Alaska. We produce high-resolution maps of surface elevation change rates ( dh ) and dt velocities for these icefields. dh dt are calculated by applying a weighted lin- ear regression to horizontally- and vertically-aligned digital elevation models (DEMs), revealing thinning patterns for individual glacier basins and allowing us to estimate total mass loss for each icefield. To our knowledge, the work presented here includes the first published study to use the technique of DEM time series to study mass loss of entire icefields. Velocities are measured by pixel-tracking applied to satellite image pairs, helping constrain the dynamic component of mass loss and detect acceleration. We provide a brief overview of the impact of changing various pixel-tracking parameters on velocity measurements, demonstrating, for example, how the ability to adjust parameters helps maximize coverage compared to working with fixed parameter values. We find an average mass loss rate at the CDI of -3.9±1.5 Gt yr-1 between 2000 and 2011, the first produced for this icefield. Three marine-terminating glaciers that cover 12% of the icefield area account for 31% of mass loss. Velocity measurements at the largest of these, the rapidly retreating Marinelli Glacier, constrain the lower bound on the annual calving flux as approximately 82±41% of the average mass loss rate for the glacier. The disproportionate mass loss contribution of the three tidewater glaciers, coupled with the high calving flux and retreat at Marinelli Glacier, provide evidence that dynamic mass loss is an important component of thinning at the CDI. At NovZ, we extend estimates of mass loss back to 1952 and up to the present. We find that the recent average thinning rate of -0.41±0.10 m water equivalent yr-1 (m w.e. yr-1 , or elevation change at density of 1000 kg m-3 ) from 2012-2013/2014 is higher than the long-term average of -0.24±0.04 m w.e. yr-1 from 1952-2013/2014. Some of the increase is likely due to warming in the region, as recent thinning is higher than the long-term average at both land- and marine-terminating glaciers. There is also evidence of a dynamic component, because recent thinning, retreat and front velocities are all substantially greater at tidewater-terminating glaciers than land-terminating glaciers. The impact of ice dynamics is particularly apparent at Inostrantseva Glacier (INO), which ac- celerated at some point after 2006, leading to rapid retreat and thinning there. We compare our results at the CDI and NovZ with our dh dt and velocities for the JIF and Stikine in southeast Alaska. We explore how variations in climate, hypsometry and dynamics all contribute to the different magnitudes and patterns of mass loss at each icefield. The methods presented here for the assessment of icefield mass loss will help better constrain their contributions to SLR over the coming century.