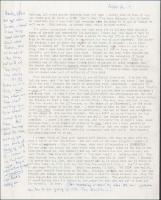 Diana is concerned that Ghali is too dependant on his despair like she was on her pain, and warns him that suffering alone will not suffice as a long-term solution. Where she once wallowed in her own loneliness, she has reached a point past that. A point, where she feels the little things in her life are fleeting as she approaches closer to death, and wishes she had more time to appreciate them. This reminds Diana of a girl who stayed with her, Marion, who could not cope with the loneliness after the end of a relationship. Diana goes on to update Ghali on the lodgers in her home and neighbors. These include, Barbara who is having a tough time during her pregnancy. Her lodger is cooking for her boyfriend tonight, and Diana commends this believing that cooking is more a social exercise than anything else, most enjoyable when done for someone else. Diana assures Ghali that few, if any of her family members will talk to her about her new book, and they will make sure she does not see her uncle who strongly opposes the book. She plans to stay some time with her brother who lives in a small, shanty cottage with his wife and four sons who are havoc-wreaking children. All in all it will be an exhausting Christmas that she would rather spend by herself than with her chaotic family. Diana speaks of an anonymous fan letter she received from someone using the pseudonym, Pan. He sends her numerous poems and she believes she has figured out his identity. Her brother warned her that his old officer friend. Michael was planning on sending Diana some writing soon. Michael had lived in Diana's apartment with her and Barbara and he had various peculiar characteristics. He had regimented schedules of sleeping and waking up, and he was basically an alcoholic. When drunk he would first find it necessary to go to a monastery, and after drinking more he would get lustful and attempt to enter Diana and Barbara's rooms at night (to which he had to be turned away, but not reprimanded the next day). He eventually became a spy for the British Secret Service (as Diana found out when he got drunk one day) in Persia. The poems he sent her were often about nature and Diana could never understand what made him so odd. She adds that there is a job opening where she works in the accounts department and decided to try and see if her office could get a permit for Ghali to come work there. Diana writes an additional page to her original letter explaining that her theory that Pan was Michael has been proven wrong. Pan has been calling her house in the mornings and she has begun to detest him because she thinks he is the kind of person who is delusional about his own sensitivity and spirit because of his loneliness. However, she prevents herself from being rude because she simultaneously feels sorry for people like Pan who are so lonely that they can fall in love with a book. She also mentions Ghali's previous explanation of his views on marriage. She notes that his views prove wrong the misconceptions that people have about Oriental people's views on marriage. He proves that their views are not limited, but drastically varied. However, she also believes that Barbara and Anthony's decision to live together, but lead separate lives was not their initial intent with marriage as Ghlai believes. Diana sees it as a response to a marriage going wrong and an attempt to salvage the marriage as a label because they are so dedicated to the concept of 'sharing,' even if they want to live separate lives. She ends with a note saying letters are not sufficient, for she had numerous other replies she wanted to include to his last letter, but this letter already went on too long. Also, she adds that she wants to see all the writings he has been working on more than she wants another letter from him.