The Absence of Muslim Women in Shaping Islamic Thought: Foundations of Muslims’ Peaceful and Just Co‐existence 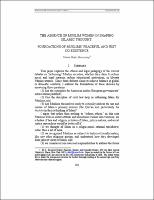 This paper explores the ethical and legal pedagogy of the current debates on “reforming” Muslim societies, whether they claim to reform social and legal systems, reform educational institutions, or liberate Muslim women. Since these debates claim to achieve balance in global or domestic conflicts, I address the foundations of these debates by answering three questions: (1) Are the rationales for American and/or European governments’ interventions justified?; (2) Can the discipline of civil law help in rethinking Islam for Muslims; and (3) Are Muslims themselves ready to critically address the use and misuse of Islam’s primary sources (the Qur’an and particularly the Hadith) in their rethinking of Islam? I argue that rather than seeking to “reform others,” in this case Muslims with an elitist attitude and sometimes violent interventions, we scholars of law and religion, scholars of Islam, policy-makers, and social justice researchers would be better off if: (1) we thought of Islam as a religio-moral rational worldview, rather than a set of laws, (2) we recognized Muslims as subject to historical transformation, like any other religious groups, and understood how they developed their present views of Islam, and (3) we considered our own real responsibilities to address the forms of global injustices as powerful shapers of world politics, particularly the politics of difference—the view that the “other” is inferior, and women’s role as mostly complementary to men. These arguments will be developed by addressing (a) the limitations on “reforming” Muslim societies if one only continues the common debates and practices of what is known as “Islamic law” or “shari’a law,” (b) the deficiencies in confusing Islamic guidelines with current customary and legal systems in Muslim societies, (c) the problems resulting from confusing Islamic principles in the Qur’an with their extrapolations in the Prophetic tradition (the Sunnah or Hadith) and especially with jurisprudence rulings (Fiqh) or customary practices (‘Adat or ‘Urf), and (d) the effects of Muslim women’s absence in shaping Islamic thought, from the time of the first Muslim community about fourteen centuries ago.

Journal of Law and Religion