Intimate Contests: Manhood, Friendship, And The Coming Of The Civil War 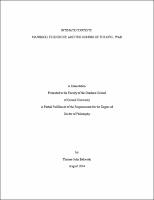 The study of antebellum American political development has not traditionally been associated with the study of intimate male friendship. Yet, male political actors in the decades before the Civil War should be regarded as highly gendered participants in contested sets of relationships with other men and women, a view that changes the study of political history of this period. For, in the intimacy of the Washington boardinghouses, in the fraternal, often romantic language of epistolary correspondence, and in the interconnected relationships formed with their respective families, friendship profoundly shaped the personal lives and political decisions of those at the highest level of public office. In the partisan times of the Jacksonian age, intimate male friendships were still both common and highly beneficial for individual statesmen. For this second generation of political leaders, party affiliation combined with personal commonalities, such as bachelorhood, proved decisive in creating alliances. But these friendships did not always benefit their participants, nor did they necessarily always promote the cause of Union. By the start of the Civil War, political actors utilized friendships of a more instrumental kind in the increasingly violent contest for power in the nation's capital. Intimate male friendships proved a highly useful and durable political construction in the years before the Civil War. Over time, they shifted from enabling great political success through cross-sectional amity to producing violent personal attacks on members of opposing sections. In the fratricidal tempest of the Civil War, more than the Union was shattered: the intimate male friendships that had sustained the preceding age were also destroyed.