Death Of A Salmon: An Investigation Of The Processes Affecting Survival And Migration Of Juvenile Yearling Chinook Salmon (Oncorhynchus Tshawytscha) In The Lower Columbia River And Ocean Plume 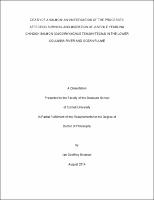 From 2008 to 2011, migrating acoustic-tagged juvenile yearling Chinook salmon smolts (Oncorhynchus tshawytscha) were detected on receivers deployed across the Columbia River and continental shelf at Cascade Head (Oregon), Willapa Bay (Washington), and Vancouver Island (British Columbia). The telemetry data were used to estimate survival and record migration parameters. These were evaluated against oceanographic and freshwater hydrologic variables in statistical and individual-based models. Plume survival was found to be variable, but daily survival rates were more constant and survival was effectively modeled as exponential decay. Correlates of early marine survival that do not have direct effects may act on plume survival by controlling the period of exposure to plume predation. In 2011, half of smolts released were exposed to total dissolved gas levels (TDG) above 120%, the water quality limit for TDG below Columbia River dams. This exposure appears to have negatively affected daily survival rates in the lower river and plume, and has important implications for a proposal to increase the TDG limit to 125% to support spring fish passage. Finally, consistent with the critical size, critical period hypothesis of salmon production, it appears that smolts select habitat to maximize their growth as they migrate north through the plume, rather than selectively using local currents to speed their passage. These findings shed new light on perennial questions in salmon early marine ecology. They lay the groundwork for future research aimed at understanding the effects of changing oceanography and freshwater hydrology on salmon migration and survival.